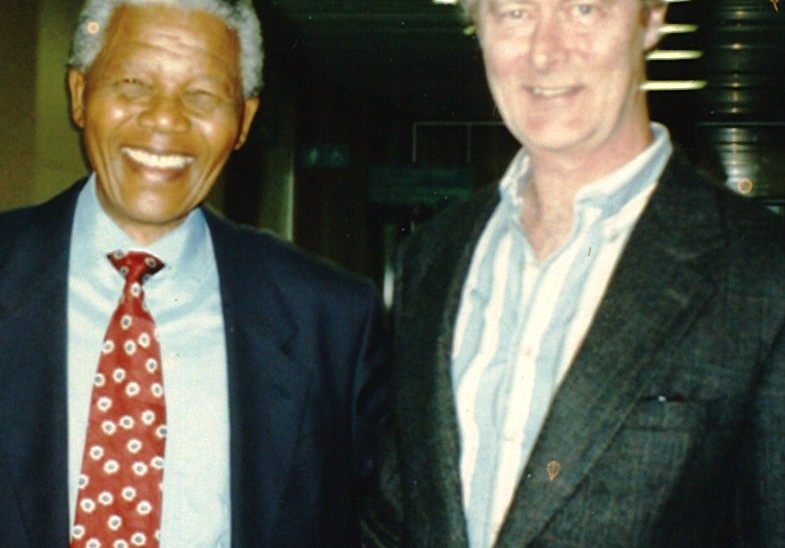 Ahead of Mandela’s funeral on Sunday, O’Malley joins Here & Now’s Jeremy Hobson to a reflect on a man who brought people of very different perspectives together.

O’Malley also does this kind of work, trying to bring Sunnis and Shiites together in Iraq, and Protestants and Catholics together in Northern Ireland, though his organisation, The Forum for Cities in Transition.

Nelson Mandela will be buried this weekend in home village of Qunu in South Africa. And much has been said over the past week about him, but we want to talk now about the influence he had on bringing people together far from South Africa. Padraig O’Malley is the Moakley professor of peace and reconciliation at the University of Massachusetts in Boston. He brought Protestants and Catholics from Northern Island to South Africa to meet Mandela. He’s also worked to reconcile Sunnis and Shiites in Iraq. And he’s with us in the studio. Padraig, welcome.

HOBSON: Well, let’s talk about the magic that Mandela had when it came to bringing people together. What do you think that was?

O’MALLEY: Well, I can speak specifically to Northern Island. In a general sense, he brought people together from the very moment he left jail and became a free man, because he put the entire emphasis of his negotiations with the Afrikaners and the white people on alleviating their fears. And he instructed his negotiators to identify their fears and to put together a package that would address each of the fears. So he was always conscious that if there was to be a successful South Africa, you had to have blacks and whites working together.

HOBSON: Fears about the other side?

O’MALLEY: Oh, yes. When jus before Mandela was released – I mean, you know, in South Africa at that time – and the fear among white people is what made them crazy. They thought that blacks where going to kind of start invading their homes and start kind of kicking them out of their houses. And the rumors are bizarre the very least.

HOBSON: Yeah. So he identified the fears and then tried to figure out how to alleviate those fears?

O’MALLEY: Yes. And, of course, the seminal moment of that was when he went to the World Cup rugby final in Cape Town and the Springboks rugby team of South Africa, who’s just been barred from sports for a long time. But it was the symbol of white’s supremacy. And it was playing Australia in the finals. Mandela walked on to the pitch before the match, wearing a Springbok jersey and shook each of the hands of the team. And the stadium, which was mostly white people, just lift up in a huge roar. And after South Africa won in the dying moment of the game, he again came down on to the field, and the players practically embraced him, and he held up the cup. And he holding up that cup wearing the jersey with the cup, that was the symbolic moment that brought all of South Africa together.

HOBSON: Is there any place in the world that you look now and say, these two sides that disagree will never be able to go together.

You know, in the case of Ireland – and you could say that the colonization of Ireland and the opposition to it began in 1640. It took nearly 400 years before that conflict was over. That conflict faded out every century. It wasn’t something that just died down.

HOBSON: But what is it that finally gets rid of it? Is it that the people who really have the strongest hatred for the other side die off? Their children don’t have quite as much animosity anymore?

O’MALLEY: And it was in that mutual understanding and was communicated to each and was allowed to calculate and be thought about, and that the basis of a peace process began to be laid.

HOBSON: I don’t want to compare this to these events that we’re talking about, really, but when you look at the inability of two sides to come together in Washington, they can’t beat each other. It’s divided government right now. But they don’t seem very willing to work together on almost anything.

O’MALLEY: They don’t seem very willing to work together right now. But when – 20 years from now, when you look back at the history of this period, it would simply be a blip in time. And two parties were so divided that they could not work together in a particular congress or maybe even two congresses in a row, it was certainly not going to be something that is permanent.

HOBSON: That’s very hopeful of you.

HOBSON: What do you think will get them to overcome their differences?

HOBSON: Now that Nelson Mandela has passed away, if you were trying to bring two sides somewhere to give them inspiration, to resolve their differences, who would you go to? Who’s the new Mandela?

O’MALLEY: I wouldn’t go to a Mandela first. I would go to the parties first. And I would stand as I did in Northern Ireland, spend decades getting to know the leaders in the parties and to gaining their trust. I don’t think there is any inspirational figure today that, in any way, measures up to the unique qualities that Mandela had.

HOBSON: What is the memory that you will be left with, a personal interaction that you had with Nelson Mandela?

O’MALLEY: After I had interviewed him for about a couple of hours in connection with my documentation of the transition, he handed me the introduction he had done for my book on Maharaj, another icon of the struggle. And I had expected to get two pages from him, and he had written 15,000 words.

O’MALLEY: And I said wow.

O’MALLEY: And it was his, again, that air of, you know, when somebody has charisma, they walk into a room and the shape of the room changes before they open their mouths.

HOBSON: That was him.

O’MALLEY: Mandela was him.

HOBSON: Padraig O’Malley is the Moakley professor of peace and reconciliation at the University of Massachusetts in Boston. Padraig, thanks so much for coming in.

O’MALLEY: Thank you. Was a pleasure.

HOBSON: And you’re listening to HERE AND NOW.